1. No person may operate this aircraft unless the Special Airworthiness Certificate, FAA Form 8130- 7, for this aircraft is displayed at the cabin or cockpit entrance so that it is legible to passengers or crew.

3. This aircraft may only operate from Lincoln County Airport. Lincolnton N.C.,until the requirements of 14 CFR part 91.319(b) have been meet.

4. This aircraft shall be operated for at least ( 20 ) hours with at least ( 10 ) takeoffs and landings (to a full stop) in the geographical area described as follows: Flights will be conducted within a 25 mile radius of Lincoln County Airport. Lincolnton N.C.

5. Application must be made to the geographically responsible FSDO for any revision to these operating limitations.

6. Except for takeoffs and landings, this aircraft may not be operated over densely populated areas or in congested airways, except when otherwise directed by Air Traffic Control or in an emergency situation. When exercising this authorization, the pilot-in-command (PIC) must request a departure route that will avoid densely populated areas and congested airways whenever possible.

7. This aircraft is to be operated under VFR, day only

8. No person may be carried during flight unless that person is essential to the purpose of the flight.

9. No person may operate this aircraft for carrying persons or property for compensation or hire.

10. Aerobatic maneuvers intended to be performed must be satisfactorily accomplished and recorded in the aircraft records during the flight test period.

11. This aircraft shall not be operated unless within the preceding 12 calendar months it has had a condition inspection performed in accordance with appendix D of part 43 and found to be in a condition for safe operation. This inspection will be recorded in the aircraft maintenance records.

12. Condition inspections shall be recorded in the aircraft maintenance records showing the following or a similarly worded statement: I certify that this aircraft has been inspected on (insert date) in accordance with the scope and detail of appendix D of 14 CFR part 43 and found to be in a condition for safe operation. The entry will include the aircraft total time in service, the name, signature, and certificate type and number of the person performing the inspection.

13. Only FAA-certificated mechanics with appropriate ratings as authorized by 14 CFR part
43.3 may perform inspections required by these limitations.

14. The cognizant FAA FSDO must be notified, and their response received in writing, prior to flying this aircraft after incorporation of a major change as defined by 14 CFR part 21.93.

15. This aircraft must display the word EXPERIMENTAL in accordance with 14 CFR part 45.23(b).

16. This aircraft shall contain the placards, markings, etc., required by 14 CFR part 91.9

18. Following satisfactory completion of the required number off flight hours in the flight test area, the pilot shall certify in the logbook that the aircraft has been shown to comply with 14 CFR part 91.319(b). Compliance with part 91.319(b) shall be recorded in the aircraft logbook with the following or a similarly worded statement: I certify that the prescribed flight test hours have been completed and the aircraft is controllable throughout its range of speeds and throughout all maneuvers to be executed, has no hazardous operating characteristics or design features, and is safe for operation.

THE FOLLOWING PHASE II OPERATING LIMITATIONS APPLY WHEN OPERATING OUTSIDE THE FLIGHT TEST AREA AFTER COMPLETING THE ENTRY STATED IN LIMITATION NUMBER 18:

2. No person may operate this aircraft for other than the purpose of exhibition, to exhibit the aircraft, or participate in events outlined in Norm Steinwedel’s Program letter (or any amendments) describing compliance with 14 CFR part 21.193( d). Additionally, this aircraft shall be operated in accordance with applicable air traffic and general operating rules of 14 CFR part 91, and all additional limitations herein prescribed under the provisions of part 91.319(e). These operating limitations are a part of the FAA Form 8130-7 and are to be carried in the aircraft at all times for availability to the pilot.

4. This aircraft is restricted to airports that are within airspace classes C, D, E, and G during proficiency flights, except in the case of a declared emergency or when otherwise directed by Air Traffic Control.

5. The owner/operator of this aircraft must submit an annual program letter update to the local FSDO that lists airshows, fly-ins, etc. that will be attended during the next year, commencing at the time this aircraft is released into Phase 2 operation. This list will be subject to amendments, as required, by letter or facsimile transmission.

6. The owner/operator of this aircraft must ensure that a copy of the current program letter, and any modifications, are carried aboard this aircraft at all times.

7. This aircraft is authorized for flights at air shows or air races conducted under a waiver (if required) issued in accordance with 14 CFR part 91.903.

8. Unless equipped for night and/or instrument flight in accordance with 14 CFR part 91 91.205, this aircraft must be operated VFR, Day only.

9. No person may be carried in this aircraft during the exhibition of the aircraft’s flight capabilities, performance, or unusual characteristics at air shows, motion picture, television, or similar productions, unless essential for the purpose of the flight. Passengers may be carried during flights to and from any event outlined in the program letter or during proficiency flying, limited to the design seating capacity of the aircraft.

11. This aircraft shall not be used for glider towing, banner towing, or intentional parachute jumping.

12. This aircraft does not meet the requirements of the applicable, comprehensive, and detailed airworthiness code as provided by Annex 8 of the International Convention of Civil Aviation (ICAO). The owner/operator of this aircraft must obtain written permission from another country’s Civil Airworthiness Authority (CAA) prior to operating this aircraft in or over that country. That written permission must be carried aboard the aircraft together with the u.s. airworthiness certificate and, upon request, be made available to an FAA inspector or the CAA in the country of operation.

13. In accordance with 14 CFR part 47.45, the FAA Aircraft Registry must be notified within 30 days for any change of the aircraft registrant’s address. Such notification is to be made in the form of a submission of an FAA Form 8050-1, Aircraft Registration Application.

14. Aircraft instruments and equipment installed and used under 14 CFR part 91.205 must be inspected and maintained in accordance with the requirements for those instruments found in
14 CFR parts 43 and 91.

This author hasn't written their bio yet.
Pilatus P-3 . has contributed 20 entries to our website, so far.View entries by Pilatus P-3 .

Pay close attention during an Annual or a Prebuy Inspection[...] 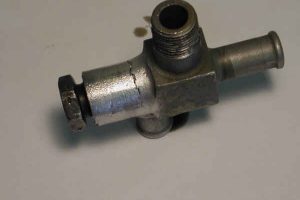